SEC12.com is a fan site dedicated to publishing unique SEC Football facts and features online. We are not affiliated with the Southeastern Conference, however we’re huge fans.

The official website of the Southeastern Conference football is SECSports.com.

Hey, do you think that you know all about SEC Football? Go ahead and see what your grade is on the SEC Football Stadium Quiz.

The Dawgs and the Tide represented the SEC well by meeting in the College Football National Championship Game. Way to go National Champion Georgia Bulldogs and runner up Alabama Crimson Tide for one of the most entertaining college football seasons in history! 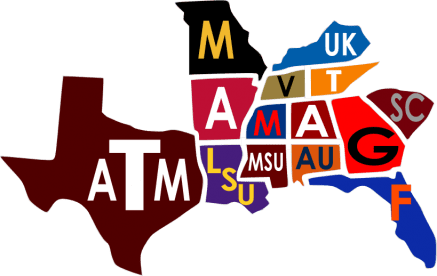 The addition of Missouri and Texas A&M changed the divisional structure of the SEC beginning in 2012: 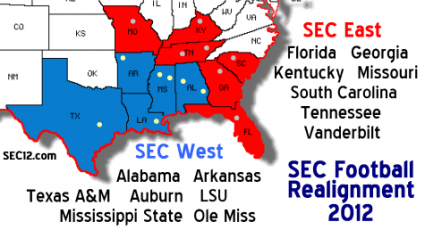 The 2021 SEC Football Championship Game will be held in Atlanta, Georgia on December 4, 2021.

The SEC Football Champion gets the automatic bid to play in the Sugar Bowl at the Superdome in New Orleans.

If the SEC Football Champion is selected to play in a College Football Semifinal Playoff Game in a year that it is not played in New Orleans, the Sugar Bowl selects the SEC runner-up.

Under the current divisional format, each SEC school plays a total of eight SEC conference games, consisting of the six other teams in its division, one school from the other division on a rotating basis, and one school that is its cross divisional rival.

The SEC instituted this policy to keep some of the long standing football rivalries intact.